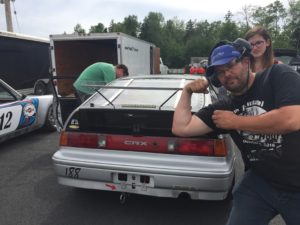 A bit of misfortune caught up to us at the racing weekend. We didn’t get to race due to mechanical failure. So we packed it up and headed home – not a great feeling by any means. I guess this is the other side of racing. This shit happens to everyone at some point. The best we can do is reflect, learn a lesson (which I’m about to share) to avoid or prevent future recurrences, and think positive.

Before I get into what I’ve learned, allow me to reflect (but if you want to skip right to the kaizen, click here).

We had issues in the last few races where the brakes overcook and the pedal drops. Our solution was straight forward – replace the brake fluid with high quality racing stuff that can withstand heat. You’re probably thinking, “duh, why wouldn’t you have this in the first place?” Well, last season we were in a crunch and put in some crap brand Dot 4 from a local shop that was open late on a wrenching weekend and then we forgot about it. So this time we put in the good shit.

In the practice session the day before the race we realized the brakes faded after just 3 or 4 laps. WTF?! 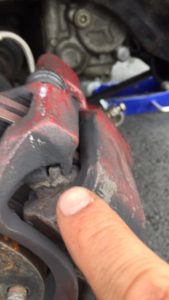 In the paddock we jacked up the car and spun the wheels to see if there was any irregular friction. The rears felt fine. On the driver’s side front everything also felt fine. On the passenger, however, there was a little bit of extra rubbing. The only thing that looked like could cause this was a pad sitting awkwardly in the bracket. We were missing a slider clip, which is typically an optional anti-rattle piece not needed for racing applications. So we got one anyway from a set of old calipers we had at home. Thanks to my bro, Vlad, for delivering it to the track!

We weren’t too content with our theory though. So we bounced some thoughts around the paddock and theorized that the master brake cylinder could be bad bypassing the fluid, thereby aerating it with each pedal press. This seemed to fit because the symptom seemed to get worse over time (i.e. seemed like we could run fewer and fewer laps before overheating each race). We were lucky that our fellow CRX competitors, the Browns, had another master cylinder in their parts car and they live somewhat near the track so we ran over to get it.

Long story short, by midnight of the pre-race night we had the master cylinder replaced and a new batch of fresh high quality brake fluid bled into the system (huge thanks to Mike Brunt for sharing his good stash in the time of need).   But this came with a plot twist…

As we started to back the car out of the tech bay to take it back to our spot in the paddock we noticed the driver’s front brake was ceasing. WTF again!?  We looked closer and found that the f**cking axle nut was loose. This was the cause of the overheating brake issue all along!  So we re-torqued the nut, put the car back in its spot and went to bed.

Loose Nuts Behind the Wheel (Us too 😉 )

In the morning of race day, I went out for qualifying. 2 laps in I realized that the left front suspension felt floppy in left hand turns (T5 and T11).  So I brought it in and we quickly realized that the camber on that side was full positive because the damn nuts behind the wheel (bolts actually, but you see what I did there, eh eh 😉 of the upper control arm were loose, and one was missing. Joel from Rustbucket Racing luckily had an assortment of Honda bolts and donated one that fit.

So we thought we were all sorted out and Ben went out for his qualifying session. After a couple of laps he pulled into the pits for a few seconds and went back out. One lap later there was a red flag given by the track marshals due to our car being immobile in Turn 2.  The cause was a broken off axle nut followed by a sheared bearing and hub assembly.

Unfortunately we didn’t have a spare knuckle with the hub/bearing pressed in, nor another axle. Ideally we should have, but we spent all our time sorting out other issues on our 27 year-old racecar and budget was starting to run a bit low. So anyway, we packed it in and had an early beer.

The next 2 days of existence felt harsh. I was in a bitter mood and a bit depressed. On Tuesday I reconnected with Ben and found out he felt just as shitty.  It also didn’t help that I finally put together the season’s maintenance cost analysis. We’re $3600 CAD into it, excluding fuel, entry fees and truck maintenance.

To get the blues out of the system a friend lent me his ear and let me vent some frustrations out. Now, as I write this, I am feeling a lot better.  I’m back on the bandwagon and getting excited for the Slalom @ Slemon 2017 (a legendary autocross event in Summerside, PEI) in the FRS! We’ll find a way to get the CRX all fixed up for August in the coming weeks.

The key takeaway from this experience is that on a racecar nuts and bolts simply vibrate off. It is therefore important to check and re-torque them after every race day.

On a front-wheel drive car here is the list I came up with of things to check:

Another idea that a fellow racer, Doug Bland, pitched is to use Loctite Blue on the list mentioned above. This shit: http://www.loctiteproducts.com/p/t_lkr_blue/overview/Loctite-Threadlocker-Blue-242.htm. It is designed to prevent nuts and bolts from loosenin up due to vibrations.

I want to close by saying thanks to everyone that helped out at the track pre-race day and on the day of to help us get as far as we could to stay in the game. Especially: Mike Brown for the spare brake master, Mike and Dustin of the #54 Golf for their help with the brake fluid and tools, Brad Wadden for helping bleed the brakes, Lucas for the halogen light and Joel Nelson for willingly sharing his on-track stash of Honda parts.